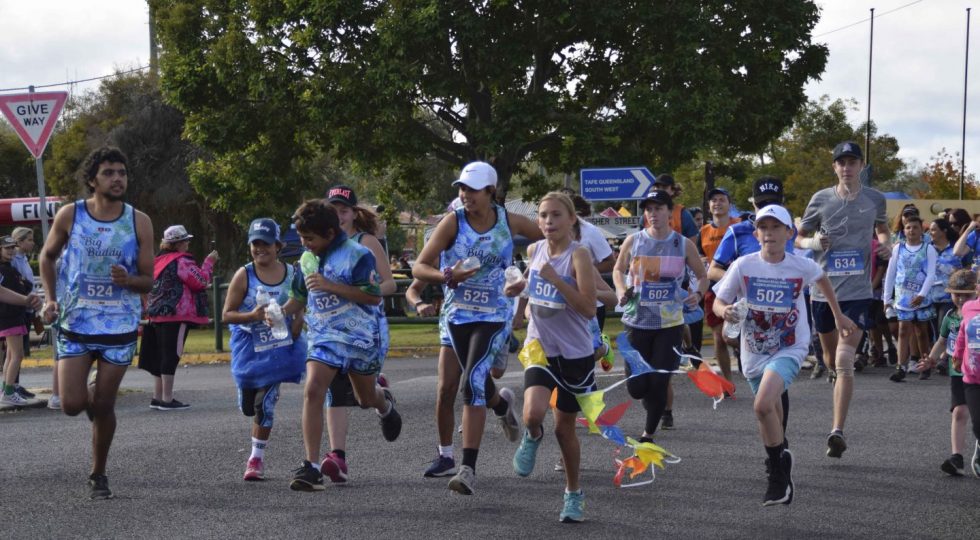 On May the 19th
the Ration Shed held it’s 6th Reconciliation Fun Run from Murgon to
Cherbourg.

More than 500 walkers and
runners took part this year, either tackling the 7km distance from Murgon Showgrounds
to the Ration Shed Museum along Cherbourg Road, or a shorter 3km course around
Cherbourg’s streets.

This year’s 7km men’s and
women’s sections were won by a father-and-daughter combination from Nanango,
with father Steven O’Connor and daughter Paige narrowly beating their
opposition across the line.

One of
our aims is to promote Reconciliation, encourage healthy outdoor activities,
and showcase Cherbourg to non-residents and help raise funds for our
historical precinct.

Before race day, organisers
had been concerned the Federal Election and other competing events across the
region might affect participant numbers, but these fears proved groundless.

Event coordinator, Robyn Hallewell
said a very pleasing feature of this year’s Fun Run was that it seemed more
than half the people who took part had never been to the event before.

It important for any event
to continue to attract new people, and the high number of new participants –
who came from all over the South Burnett and as far afield as Brisbane,
Toowoomba, the Sunshine Coast and Gold Coast – was a positive sign.

This year the Fun Run made a small change – the 10km course, which hadn’t proved popular, was dropped but this made the 3km race even more popular. The runners were greeted in Cherbourg with live entertainment, food and other stalls. There were rolling raffles, street performers, live music, arts and crafts workshops and much more.