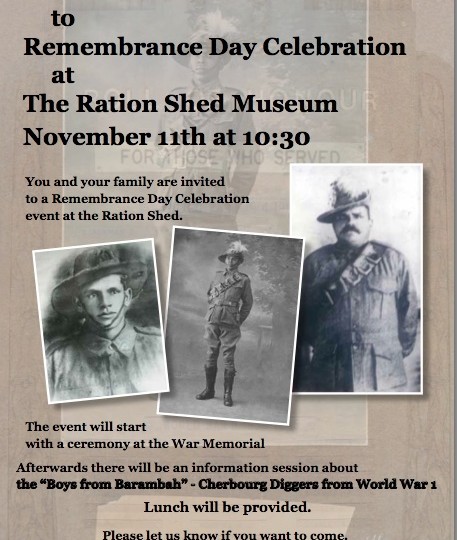 An invitation to all families and friends of Diggers from the First World War that are connected to Cherbourg. We are having a Remembrance Day Celebration on the 11 November, which starts at 10:30 at the War Memorial in Cherbourg. The Ration Shed Museum has been busy researching information about our Cherbourg World War 1 soldiers and have discovered more men from Cherbourg that enlisted to fight in World War 1. We are planning on updating our Honour Board and including their stories in our exhibition which opens on ANZAC Day 2015.

If you are a family member of one of the following World War 1 soldiers and would like more information or have information to share, please contact the Ration Shed Museum or come to the event on the 11 November – we have information about most of the Diggers listed below to share with you . All families of these soldiers and any other interested people are invited to join us.

The “Boys from Barambah” is a ‘Queensland Anzac Centenary Community’ Project funded by the State of Queensland. www.qld.au/anzac100.