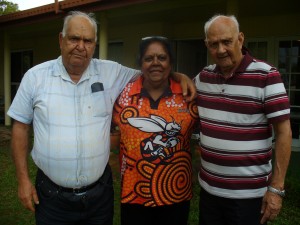 Film makers Sandra Morgan and Robyn Hofmeyr received funding from Museum and Gallery Services Queensland to record the history of two Cherbourg Elders. They traveled up to Rockhampton to interview Edgar Hatfield and Oliver Holt. Both of the Elders are in their eighties and grew up in the Boys Dormitory. They had many interesting stories to tell about dormitory life and living under the ACT. The film will become part of the Ration Shed Museum archive parts of it will be used in and a film that is being planned about Dormitory life.