Petero Civoniceva – in white – leads off the Fun Run

Young boys and girls sprinted to the front and led the race down the track out of the showgrounds. Little did anyone know that one of these young fellas would lead all the way and break the tape at the finish line in Cherbourg 7 kilometres away. No-one knew except for one boy – Floyd “Cookie” Aubery; he announced at breakfast “I’m going to win today”. And true to his word, he led all the way. The other front runners could see this young boy up ahead; one of them said later: “we thought he was just gamin, sprinting for the front, and soon to drop out. But, hey, he kept on going and there was no way we could catch him” 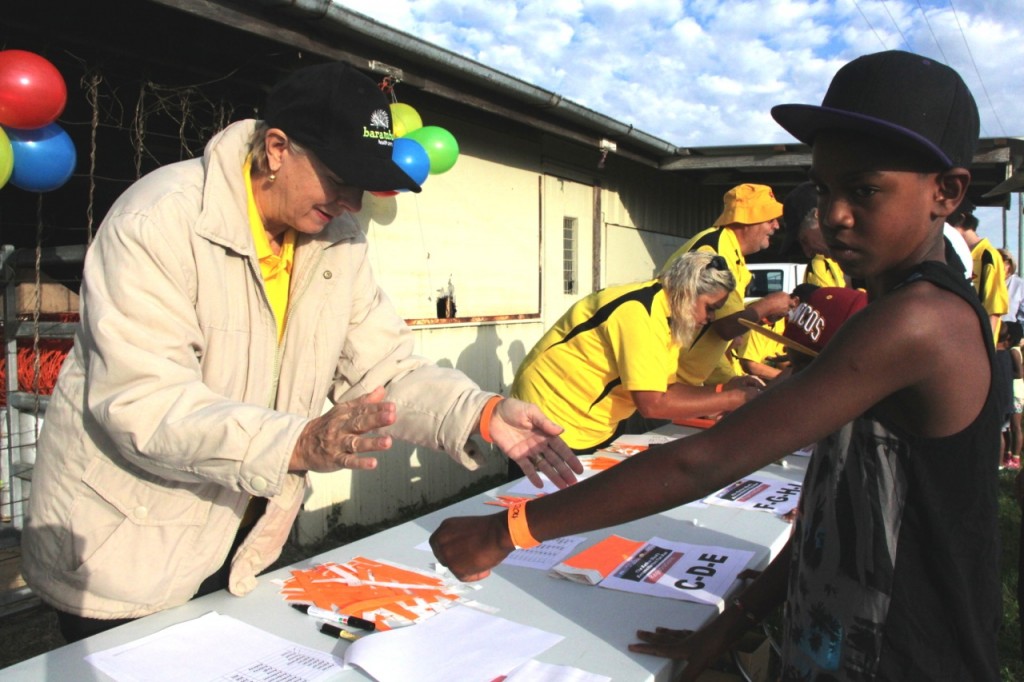 Floyd “Cookie” Aubrey registering for the Fun Run at the Murgon Showgrounds. He told people at home he was “going to win today”.

Meanwhile, towards the back of the field an elderly lady, ex Cherbourg resident, Sarah Glenbar, who had come all the way from the Darling Downs to join the race, doggedly walked the long road from Murgon to Cherbourg. She and many like her – young and old, fit and not so fit, Murris and non-Murris, locals and visitors, those in the latest running gear and those in fancy dress, people of all shapes and sizes, even a pregnant woman – came together in a wonderful show of support for Reconciliation in the South Burnett. 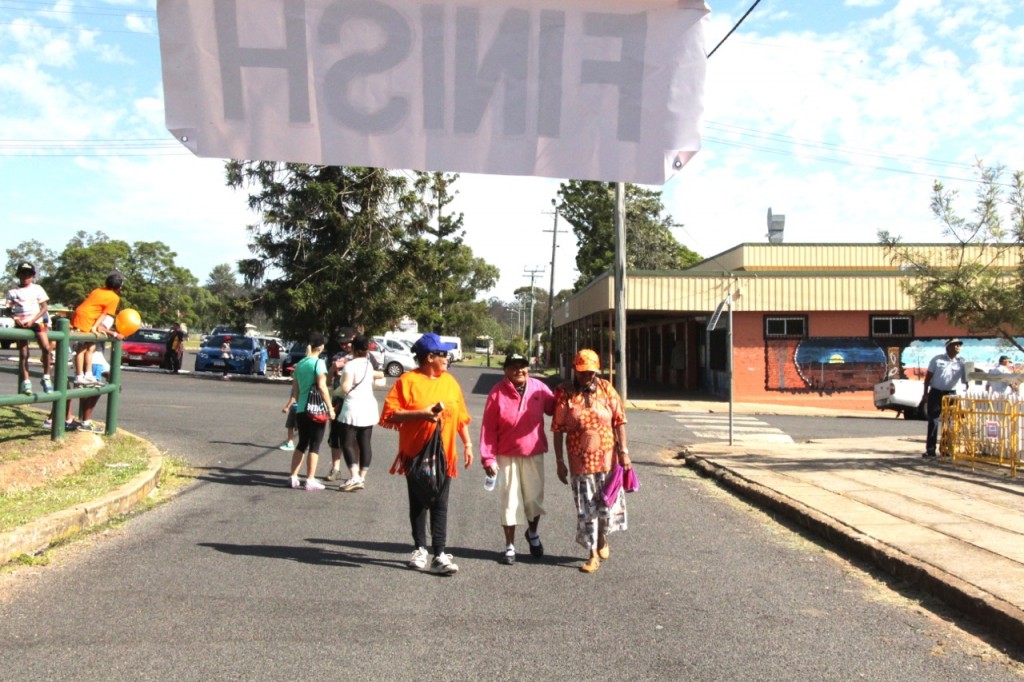 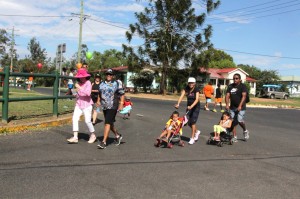 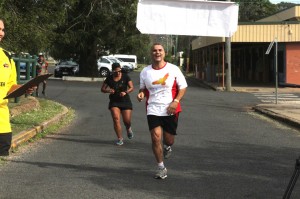 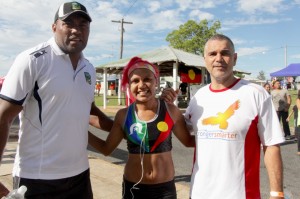 By ten o’clock the last of the competitors crossed the line and the festivities began across the Ration Shed Precinct and the Memorial Park. Hungry runners gobbled the food – barbequed kangaroo meat and traditional drover-style camp-oven stews. The Ration Shed Museum and the Boys’ Dormitory building were open for visitors and there were stalls around the site, ranging from the Cherbourg Community Health serving fruit smoothies, to local artists displays, to fun activities for kids, through to Reconciliation Queensland and Queensland Positive People HIV awareness group.

Cherbourg councillor, Arnie Murray welcomed all to Cherbourg on behalf of the Cherbourg Aboriginal Shire Council. In her welcome speech, Ration Shed president Aunty Sandra Morgan said: “I must say that when we first discussed holding a Fun Run my heart sank at the enormous undertaking… but today seeing you all here and seeing all the effort put in and all the volunteers and the beautiful spirit of the event, my heart is filled with happiness. I congratulate you all, each and every one of you for taking the time, putting in the effort to show that you believe in reconciliation. We believe in going forward together. We believe in good neighbours.”

Uncle Bill Buchanan, co-chair of Reconciliation Queensland, one of the sponsors of the Fun Run, spoke of the need to recognize racism when it raises its head and speak out against it. He congratulated the efforts of the Fun Run, saying it showed real reconciliation at work. After the speeches, a highlight was the Wakka Wakka traditional dance troupe, showing energy and skill, from the eldest down to the youngest fella, a 5 years old called Willie. 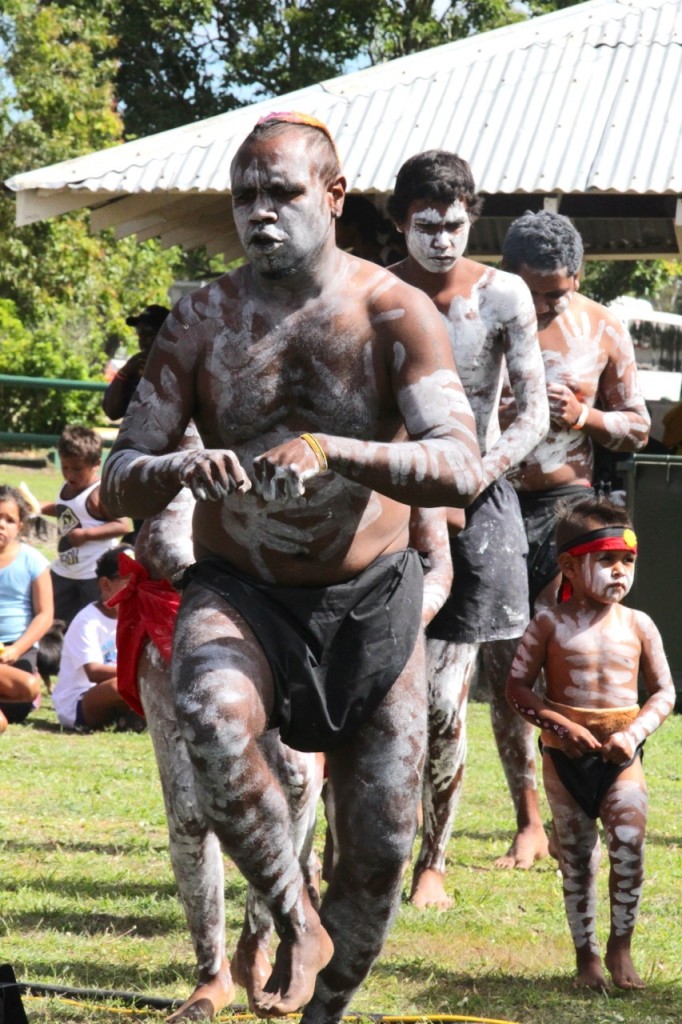 Prizes were then handed to the category winners by Petero Civoniceva. One notable prize-winner was Alana Purcell, winner of the prize for the most courageous contestant; Alana covered the course in her motorised wheelchair. Another was the award of the family prize to the Bowie family – all 14 of them – who have been staunch Ration Shed supporters over the years and who worked solidly for the last few days as volunteers. 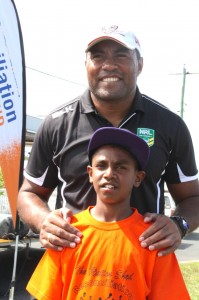 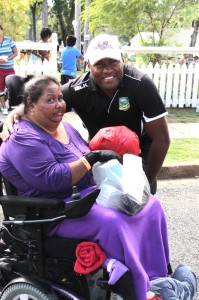 Alana Purcell wins the prize for the Most Courageous Contestant 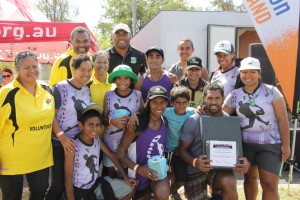 Another highlight was the sport workshops held at the sports complex, facilitated by the PCYC, where scores of kids were enthralled and engaged in activities run by Mick de Vere, Andre Moore, Kelly McKellar-Nathan and Brian Hegarty.

A special mention should go to the dozens of volunteers from Cherbourg and Murgon and beyond – parading around in their bright yellow shirts – who gave of their time and helped produce an event, which ran with hardly a glitch and was a great day for all.

It was a race, an event, for reconciliation – proof that the spirit is strong in the region, proof that a 7 kilometre road need not be a symbol of division and separation but rather one of good neighbourliness and mateship, proof that we can be together and have fun together and live in harmony in our region.

The Ration Shed is grateful for all the inputs made by so many people and for the many sponsors and organisations that have assisted in making this event possible. It is important to know that the Ration Shed Museum is an independent not for profit organisation, not under-written by any government or corporate organisation. We survive off competitive grants, sales of our art and media, visitor fees, conference facility hire and events such as this.

This event was a fund-raiser for our activities in education and reconciliation.  The Darling Downs Hospital and Health Services were one of our key sponsors. While we did not attracted huge sponsorship we are confident that the success of this event will help us in coming years.

The contributions made by individuals, small businesses and Cherbourg community organisations for this inaugural event are highly valued.

So all you Cherbourg mob and you Murgon mob keep up the training, ready for next year. Our Fun Run will be bigger and better and we’ll see you all then!