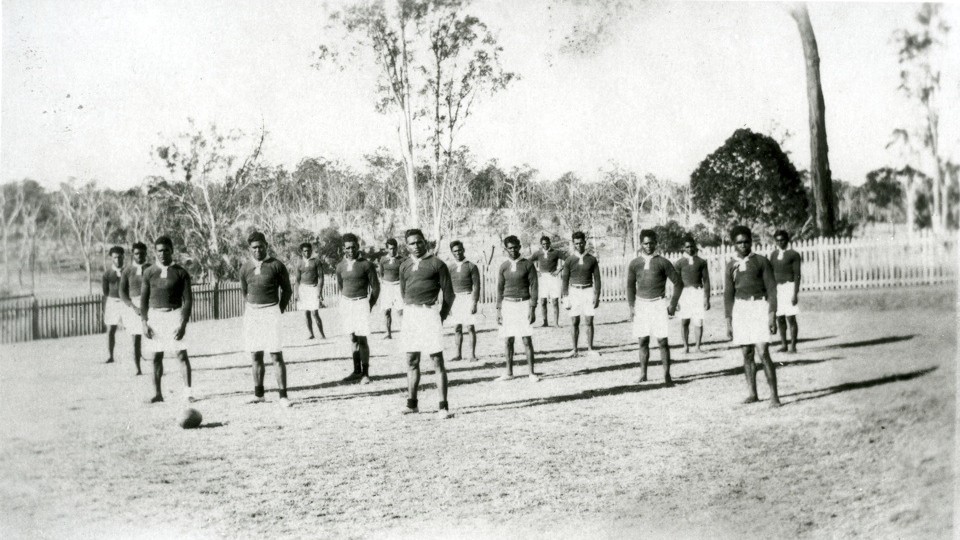 Play the Ball Exhibition – the story of sport in Cherbourg

Play the Ball is a photographic, multi-media and oral history exhibition that tells the story of sport in Cherbourg.

Cherbourg is a small community that has produced a wealth of sporting talent. It is a unique community at the “crossroads” of Indigenous and non-Indigenous communities in the South Burnett. Many people in the area had little idea of the lives being lived by the blackfellas against whom they were bowling or kicking or running.

The Play the Ball Exhibition encourages reflection, discussion and reconciliation – while honouring Cherbourg’s sporting heroes. It shows the proud undefeated teams, the big characters, the personal tragedies and heroic achievements. And it celebrates the many unsung heroes, the ordinary players who play for love of their game, their team, their community.

The Play the Ball exhibition comprises:

The launch event will be held as a keystone event for NAIDOC in Cherbourg on the 7 and 8th July 2014. The exhibition launch will host well-known sports personalities, bringing together the Cherbourg sportspeople, those in the surrounding areas of Murgon and the South Burnett and interested people from far and wide.

Play the Ball is an ambitious project which ‘shoots goals’ in many areas – a quality exhibition, a reconciliation process for Cherbourg and surrounding communities, a display of local pride in achievement, an affirmation of prowess and ability and a demonstration of what is possible to the community youth.
The Ration Shed Museum (www.rationshed.com.au) as the organising body of the Play the Ball exhibition is keen to show the public – both in Cherbourg and in the South Burnett that there is recognition and support for Indigenous success. The Exhibition is funded through the Community Heritage Program in the Department of the Environment of the Federal Government.