On the first of March Suzie Langports from the English Language College in Brisbane brought two Japanese visitors to the Ration Shed – Nobu Eto who runs a company called Australia Ryugaku Centre and Aya Koshimizu from the Nippon University in Tokyo. The aim of the visit was to see what what the Ration Shed could offer Japanese tourists and visitors.

Sandra Morgan gave them each a permit (permission to remain in Cherbourg) and told them about the permit system they had to endure. The visitors were treated to fried scones and syrup and morning tea. They were given a cultural tour, watched a local film about the story of the Ration Shed and then Rocko Langton and Venus Rabbitt provided the visitors with paints and a blank map of Australia. The local artists demonstrated a few of their art techniques and together they painted the maps.

The group are planning on bringing the first group of Japanese visitors to the Ration Shed in September and hope to follow up with many more visits. 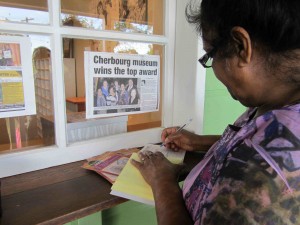 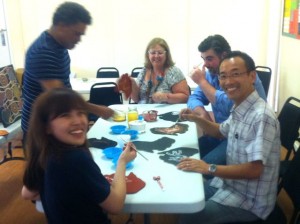